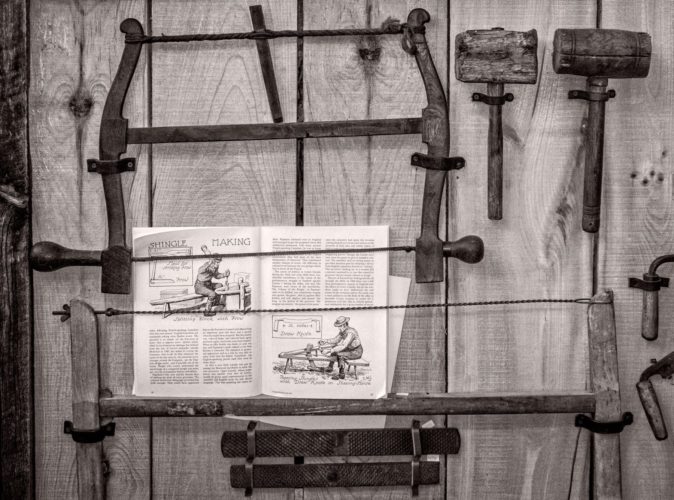 Ever since the caveman days, shelter with a roof was a necessity of existence. The cave was a place to stay warm and dry where you wouldn’t get eaten by a saber tooth tiger or trampled by buffalo. Caves offered low maintenance, which is good for hunters who had no time to do roofing.

The first recorded use of asphalt goes back as far as 625 B.C. Babylon, according to National Roofing Museum website. People mined for asphalt to use as an adhesive and sealant for centuries. The ancient Greeks used asphalt, and the word ‘asphalt’ was derived from the Greek word ‘asphaltos’ -which means secure. The Romans used asphalt to seal their baths and reservoirs. But despite early use, many years passed before Americans used asphalt for paving and then roofing. Asphalt was eventually manufactured from refined petroleum, which was used to make shingles.

During the cold winter days in the early 1800s, pioneer families would huddle by their fires in their cold wooden homes while the north wind rattled shutters and sent drafts whistling through walls. Old-time roofing was made from fabric that was coated with pine tar and it just wasn’t waterproof enough to keep the water out. Many Pioneer women turned to their Pioneer men and said, “Honey, we must do something about ye old roof,” as the rain leaked in and the heat seeped out.

Little did early Pioneers realize that in 1847, somewhere in Cincinnati, OH, Samuel M. and Cyrus M. Warren were coating thick paper with pine tar and coal tar and sprinkling it with sand. Soon, cotton felt took the place of paper roofing and the trend was to saturate the felt with petroleum asphalt and coat it with slate chips. That’s how asphalt roofing was born. The Warren Brothers Company was established in 1900 as an asphalt company by the seven sons of Herbert M. Warren from Newton, MA. It was a time when inventors and entrepreneurs raced to be the first in the asphalt industry, and the Warrens became entangled in years of litigation.

As Wilbur and Orville Wright flew their first powered aircraft in 1903 at Kitty Hawk, SC, a man named Henry Reynolds invented the first roofing shingle in Grand Rapids, MI. It was the turn of the 20th Century. In 1903, the first asphalt roof was built. The shingles were made from rolls of felt that were saturated with petroleum asphalt and cut by hand into large rectangles. The hand-cutting had to change and eventually, machines were made to cut the shingles. It was a big step toward progress and hand-cutting shingles became a thing of the past.

Along came the 1920s, when prohibition sent people running home to their stills at night. Word had it that a company named Bird and Son created a shingle with a hole in the middle for installation. But the thirst for change continued to grow as the 1920s roared on. The 1930s and 1940s saw more progress in the evolution of asphalt shingles.

In the 1950s, when everyone was rocking around the clock at the local hop, the roofing industry did some rocking of its own and the first standard asphalt shingles were introduced with a 3-tab format. Eventually, cotton felt was replaced by celluloid felt and homeowners could finally take the leak buckets back out to the barn.

When the 60s rolled around, and peace was guiding the planet, fiberglass mats appeared and replaced many felt varieties. That trend continued into the 1980s when The Cars band was playing ‘Just What I Needed’ on the radio and the roofing industry was getting just what it needed. The 1980s saw the birth of fiberglass-based shingles and asphalt roofing took off.

Zoom forward to the 2000s. As we peer over our masks, we see more homes than ever protected by asphalt roofs. According to the Home Innovations website, latest studies show that asphalt shingles are used in more than 80 percent of home roofing and re-roofing projects in the United States. The report goes on to say that 3-tab asphalt shingles are still one of the most popular roofing choices because they are suitable for most housing types.

Some companies such as GAF hosted the beginning of the asphalt roofing era. According to the GAF website, the GAF company started in 1886 as Standard Paint Company in Bound Brook, NJ. That was the same year that the first Groundhog Day was celebrated. A chemist named William Griscom developed new ideas for asphalt compounds at the small plant. In 1892, Griscom and Standard Paint created ready-to-lay asphalt roofing. It was like rubber, and it was called RUBEROID roofing. Shortly thereafter, RUBEROID became the new name for Standard Paint. More ideas evolved, including the addition of colored granules in asphalt coatings, which are still used today. GAF shingles made a name for themselves in the roofing industry early on. In 1933, the RUBEROID Co. created Tite-On shingles, a model for asphalt shingles today. In 1967, Timberline® shingles were introduced and became North America’s best-selling shingle. And as Ronald Reagan was sworn in as Governor of California that same year, the RUBEROID company merged with the GAF company and adopted the GAF name.

GAF is always working on new and better ways to protect homes, buildings, and the planet. The name GAF has been the symbol of quality roofing for generations and the company is committed to making its products better, stronger, safer, and more sustainable than ever.

GAF Master Elite Contractors are proud to bring GAF technology into their territories. GAF innovations have made roofing what it is today with innovative features such as LayerLock™ Technology, Energy Guard™ NH Polyiso Roof Insulation, and GAF Time-Release Algae-Fighting Technology. These innovations have made GAF the leading supplier of liquid-applied roof products in the United States.

In 2010, GAF introduced EverGuard Extreme, the first thermoplastic polyolefin (TPO) membranes that could withstand high temperatures of peel and stick solar panels. EverGuard Extreme was the first solar grade single-ply TPO membrane. GAF took it a step further and became the first roofing manufacturer to offer a lifetime limited warranty on all of its laminated shingles. In 2012, GAF became the first manufacturer to offer a lifetime warranty on its entire roofing system.

Zoom forward to 2021 when the first civilians were boarding rockets to outer space. The rockets soared over millions of homes with asphalt roofs. Back on earth, Adam Quenneville Roofing & Siding was named GAF Master Elite Contractor for the tenth time. It’s a status held only by one to two percent of roofing contractors nationwide.

Today, asphalt roofing has evolved into the best roofing for homes and properties. GAF is still leading the way. And Adam Quenneville Roofing & Siding is the GAF Master Elite Contractor to call when you want a roof that will take your home or property well into the future.

Sustainable solutions – good for your roof AND the earth

Is Your Roof Doing Its Job? Here’s How To Find Out!

Is your roof still doing its job or is it a slacker? Is it keeping…