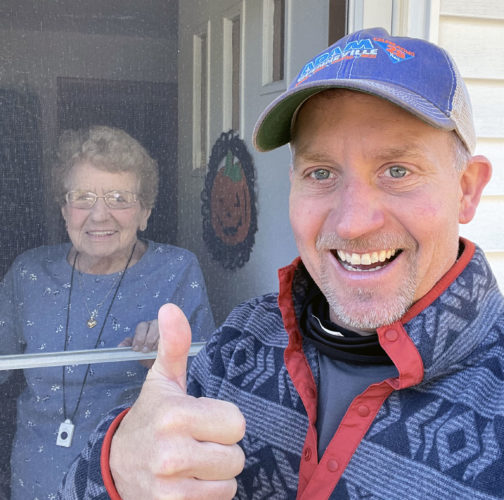 When you make a promise, it’s meant to be kept. And that’s why Adam Quenneville installed a free new roof on the home of a local woman named Mabel on Sunday, Oct. 24, 2021. That day was Mabel’s 101st birthday and Adam wanted to keep the promise he made six years earlier.

Thirty Years In The Making

While the crew was at her home, Mabel asked Adam how much longer the original roof on her house would last. Adam did an inspection of the original roof and told her that her roof was still in good condition and would probably last another five years. Mabel paused for a moment, looked Adam straight in the eye, and said with a smile, “Adam, I’ll be 100 years old in five years!” Adam was very surprised and said that she did not look anywhere near that age. And that’s when he made a promise. He told Mabel that if she called him when she turned 100, he would put a free roof on her house.

Mabel never called Adam when she turned 100, but recently her daughter Joyce contacted Adam Quenneville Roofing & Siding to have some work done on her own home. Adam called Joyce to welcome her to the Quenneville family of customers, and she mentioned her mother and the promise that Adam had made.

“I remember that promise because Mabel was a very special woman and I truly enjoyed getting to know her,” said Adam. “I wanted to keep that promise so I brought my crew to her home to install a free roof on her 101st birthday. I wanted to wish Mabel the happiest birthday ever, and it was my pleasure to honor her and the promise I made.”

Mabel couldn’t believe she was getting a free new roof! “I’ve had a lot of birthday gifts in my lifetime, but nothing that big” said Mabel with a chuckle. “At first, I thought it was a joke, but Adam was serious. I couldn’t have received anything better or bigger!”

Mabel’s 101st birthday was one to remember. The day started with a lot of activity at Mabel’s home. Adam and his crew arrived early and went to work installing her new roof. “They are such a nice group,” said Mabel. “They are wonderful people, all friendly and so nice. Adam was here until the end, and he was wonderful too. I offered him a piece of cake, but he only had a coffee.”

Mabel said her relationship with the Quenneville company goes way back to the installation of her original roof. “I think Adam Quenneville is such a nice gentleman,” she said. “He’s honest and he has a nice way about him. His father was also very nice.”

Later that day, Mabel’s entire family gathered at her grandson’s house to celebrate her big day. Guests included five grandchildren and 13 great grandchildren. Everyone brought food, gifts, cake, ice cream, and a whole lotta love. “We had so much fun,” said Mabel. “The whole family was there. Everyone!”

Looking back across a century

Mabel was born 101 years ago on October 24, 1920, in West Springfield, Ma.
She was just a baby when the Roaring Twenties era began.
It was a time when the automobile industry was born.
Radios were the only home entertainment.
Jazz and dance clubs were the rage.
Hats were in fashion on men and women.
Prohibition began.
Women could finally vote.
As for the roofing industry, the 1920s was a time when asphalt shingles started to replace wood shingles to prevent fires on rooftops.

“Things were bad back then,” said Mabel. In the 1920s, the world was still recovering from a pandemic, jobs were scarce, money was tight, and families did what they could to put food on the table.

Mabel was the oldest of five siblings. She had always wanted to become a nurse, but lack of transportation to school and the cost of education changed the course of her dreams. Instead, Mabel and her sister Elizabeth helped their mother care for their younger brothers and sisters. Mabel’s father was a mechanic, and he once repaired Cadillacs at a garage in Springfield. Mabel said her family was fortunate to have enough food and a good home over their heads. “Times were tough, but we did ok” she said. “My mother always appreciated our help.”

Mabel was married when she was 20 years old. She and her husband had three daughters, including a set of twins. Heartache came early when they lost one of the twins at three months old. Her daughter Jean is the other twin and Joyce is the other sister. Mabel’s husband passed away at age 65. Her second family brought her happiness and three more children named Andrea, Peter and Paul. They filled her life joy.

Mabel accepted a position with Kaman Aerospace Corporation of Bloomfield, CT after her husband passed away. She retired from the company after 14 years of hard work and dedication.

Mabel is still thinking about the special birthday gift that Adam Quenneville gave to her. “I thanked Adam so many times. I’m so lucky that he kept his promise. I never expected anybody to do anything like that for me. I will never forget it,” said Mabel.

Adam made another promise as his crew loaded the last of their equipment into their trucks. He said if Mabel called him the next time she needs a new roof, that roof will be a gift too.
“That sure would be something,” said Mabel with grin. “He would probably drop dead when he heard it was me on the phone 30 years from now!”

Sustainable solutions – good for your roof AND the earth

Is Your Roof Doing Its Job? Here’s How To Find Out!

Is your roof still doing its job or is it a slacker? Is it keeping…

Asphalt: An Evolution From Mines To Roofing

Ever since the caveman days, shelter with a roof was a necessity of existence. The…